Fewer Visas have been issued since Trump's entry ban

Research has shown that fewer Visas have been issued since Trump introduced the travel ban for certain Islamic countries. Is this coincidence, or not?

Fewer Visas have been issued since Trump's entry ban

Since President Trump has introduced his plans for travel ban, the number of Visas issued has declined. Research agency Reuters, has shown that fewer Visas have been issued to the people of countries where the entry ban applies.

The number of applicants is 50% less than April last year. In March, there was a 40% decrease in comparison with the year before. We can start to see a trend forming here. However, a spokesman of the US Department of Foreign Affairs does not seem to admit that we in fact might be dealing with a trend. He says: ‘Issuance of Visas is seasonal so is not the same throughout the year’. Unfortunately, the number of Visa applications is not openly discussed, so we cannot find the reason for this decline. It may be that fewer people have applied for a Visa, but it may also be that more applications have been rejected.

Trump wants a travel ban for a number of Islamic countries; Sudan, Yemen, Syria, Libya, Iran and Somalia. Given many states disagree with this, his travel ban has been withdrawn. But Trump keeps trying to make changes to that and is persistent in that. A judge in Virginia rejected the ban in Higher Appeal and called it, ‘vaguely formulated in terms of national security’. After Appeal, this could be presented to the Supreme Court. The Ministry of Justice wants to present the travel ban to the Supreme Court because, according to a spokesman, the ‘attempt of the president to increase national security is actually being interfered with’. 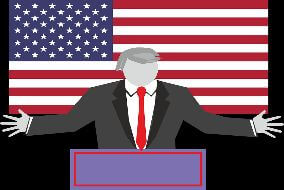