Halloween is a typical American holiday that is being celebrated each year on October 31st, however it is celebrated in The United Kingdom more and more often as well. Things that pop in mind when thinking about Halloween are; costumes, skeletons, pumpkins, and trick or treating. But what exactly is Halloween?

Where does Halloween originate from?

Halloween is being celebrated the night before the Christian holiday All Saints day, which is being celebrated on the 1st of November. All Saints day is also called “All Hallows Eve” and Halloween has been derived from that. The new year starts on the 1st of November on the Celtic calendar, making the 31st of October New Year’s Eve. This night was mostly celebrated by the Celtic in The United Kingdom. They celebrated Halloween to celebrate the return of spirits of people who passed away and who would find a new body. As a living person you of course did not want a spirit to enter your body. To prevent this from happening they would wear masks and have fire burning in front of their house. They also made a lot of noise and would wear old and ugly clothing to keep the spirits away by appearing unappealing.

Halloween is mostly celebrated in The United States, Ireland and The United Kingdom. Houses are decorated and sometimes people even turn their home into a haunted house for the children who go trick or treating. The children who go by the doors get candy after they say, “Trick or treat”. Where this tradition originates from is unclear, since both the Celtic and the Christians had traditions similar to this. Celtic boys used to go by doors to collect wood for the bonfire and the Christians used to bake biscuits the night before to give to the children who came by.

To The United States

Halloween wasn’t introduced to The United States by the Irish visitors until 1850. In Ireland they used to use tubers instead of pumpkins. Once the Irish had arrived in The United States they thought pumpkins were a much better fit then tubers. From the moment on pumpkins have been part of the holiday, they are mostly used as lanterns. 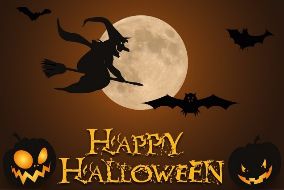