Hurricanes and tornados have been in on the news a lot in the last couple of months. But what do these different names actually mean? We have listed them for you below.

A tornado is a heavy storm, it is much smaller than a hurricane, however it does have a stronger whirlwind. A tornado often finds its origin in a serious thunderstorm. The airflows go wild and can start spiralling. In the midst of the clouds a wide hole shoots to the ground. In the new opening the air runs at lightning speed, with a speed up to 450 kilometres per hour. Everything that is not bolted to the ground gets sucked up into the hole, even garden houses and cars. Tornados are very dangerous because pieces of glass and wood get sucked in and end up somewhere else. Tornados are a frequent phenomenon in The United States, about 600 tornados per year.

Hurricanes find their origin in the hottest areas on earth. A hurricane arises above the ocean, warm water vapor and stifling air rise up and start spinning in an upward spiral. A hurricane can have a length of 400 kilometres and brings along heavy rain and enormous waves. The midst of a hurricane is called the eye. In the eye, which is about 200 kilometres wide, the sun does not shine, and the wind does not blow. Everything around the eye is a storm at full power. If a hurricane gets closer to land the eye gets a smaller and smaller, until it is about 50 kilometres wide. What happens next is the air which spins faster and faster around the eye, this causes mayor damages.

The hurricane seasons starts in April and ends in November. The wind speeds of a hurricane are measured on the Saffir and Simpson scale. There are different categories on the scale from 1 to 5. Category 1 has wind speeds from 118 to 152 kilometers per hour, this often causes no damage to buildings only trees get uprooted and beaches get flooded. At category 5 the wind speeds have accumulated to 248 kilometers per hour. At this stage inhabitants need to be evacuated, there will be large damages by the coast, waves that find themselves kilometers into land and buildings can get destroyed.

What to do when there is a hurricane or tornado?

The most famous hurricane was Katrine in New Orleans in 2005. There have been many hurricanes that caused great damages this year already, like; Harvey, Irma and now hurricane Maria.

How do hurricanes get named?

The names for hurricanes and storms get picked by the World Metrological Organisation (WMO). They picked 21 names that are used in six years’ time. The names are categorized alphabetical and do not go past the letter ‘W’. After six years the names get reused, this means that hurricanes and storms can get the same name. This doesn’t have to be the case, a country in which the hurricane has been can choose if the name can be reused. Since hurricane Katrina caused so much damage in 2005, The United States choose to get it off the list of names. 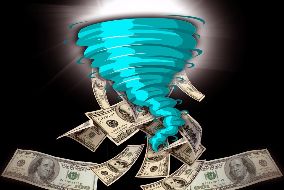