In the midst of the rocky landscape, which is known as the Red Rock County, the city Sedona is located. Originally Sedona was no more than a simple framers’ village. Nowadays Sedona is one of the most important touristic destinations of the state Arizona, with over four million visitors every year.

The first European settlements around Sedona originated halfway through the nineteenth century. More and more European pioneers discovered the wilderness and encountered the Indians that lived here. In 1870 the Indians were driven to San Carlos reserve by soldiers of the American army. This was done to make place for the white explorers.

In the beginning of the twentieth century, T.C. Carl Schnebly arrived in Sedona. He played a significant role in the construction of the Munds Trail, which is therefore also known as the Schnebly Hill Road. In that time, it was the most important route from the small-town Red Rock to Flagstaff. Because of this road trade started in this area. Traders used to spend the night at Schnebly’s home, which was located along the route. Schnebly also opened a postal office in 1902. He wanted to call this postal office Schnebly Station, however the name would be too long for the stamp. Afterwards he decided to name the postal office and later the city after his wife; Sedona.

Sedona is located in a valley. The red rocks are formed in a rock layer which is known as the Schnebly Hill. This type of rock consists of orange and red coloured sandstone and can only be found in this area. The soil is very fertile and since there is more than enough water, many trees, cacti and other plants grow here. The green plants give a gorgeous contrast with the red rock and the blue skies.

There are five important areas. In first place of course, the town Sedona itself. Furthermore, you can find Cathedral Rock in the south, Munds Mountain in the east, Oak Creek Canyon in the north, and Red Rock/Secret Mountain Area in the north west.

In the city you can find a lot of stores, restaurants and art galleries. One of the most beautiful shopping areas is the Tlaquepaque commercial centre which is built in Spanish colony style. This area is only accessible for pedestrians. Another special spot in Sedona is The Chapel of The Holy Cross. This roman catholic chapel has a place on the list of seven handmade wonders of Arizona. The chapel seems to rise from the rocks and has a stark contrast with its environment. It is a modern chapel, you can enjoy the beautiful view through a glass wall behind the alter. After a building period of 18 months the chapel has been taken into use in 1956, the chapel is open to the public.

A popular viewpoint in the city is located along the Airport Road. From the busy parking lot, you can walk up a small hill. There you will have a panoramic view of the north western part of the city. This is even more beautiful during the sunset.

East of Sedona the rouge wilderness area Munds Mountain is located. In the area you can find many hiking paths. Pay attention, most of them are not suited for the average tourist. If you are an active and experienced hiker discovering this area can be an amazing experience. The Northern side of Munds Mountain Wilderness Area is bordered by Schnebly Hill Road. This unpaved 25-kilometre-long road starts on the west side close to the city centre of Sedona and ends on the east side at the Interstate 17. The highest point is about 600 metres higher than the town. The views from this car ride are exceptionally beautiful.

The Cathedral Rock is one of the most famous rocks in Sedona. You will especially have a gorgeous view of the rock from the Red Rock Crossing. At sunset the water reflects beautifully, which makes the view so gorgeous. Red Rock Crossing is located in the Crescent Moon Park, The Cathedral Rock is not just very photo genetic there are also people who believe the rock has spiritual powers.

Shallow pools and smooth rocks form a natural water slide. These are the characteristics of the Slide Rock State. Because of the erosion shallow pools and water slides have been made, you can also find many small waterfalls and rapid streams. The park is also a lot of fun for kids and families. Just above the Slide Rock State Park the recreation area Call of the Canyon is located. Here one of the most beautiful hiking routes of Arizona starts; The West Fork Trail. The route takes you along a gap of the Oak Creek which is almost ten kilometres long in total. The gap becomes smaller and smaller as you go, and the path becomes harder to tread. You will rise a lot during the trail and will sometimes have to cross the water by using stepping stones. The trail ends in a pool surrounded by cliffs. Of course, you also have the option to hike the path for a couple of kilometres and turn around at the point where the Canyon becomes smaller and the route becomes more difficult.

South West of Sedona you can find Red Rock State Park. The part of the Oak Creek that runs through the park is very beautiful and shadowy. The visitors centre organises all kinds of events and activities, under which readings and nature walks which are guided by a guide.

In and around Sedona there are a lot of organisations that offer activities for tourists. There are many activities you can pick from, like: a jeep tour, Hummer tour, mountain biking, kayaking or horse riding. Discovering the area by air is also a possibility, for example in a small plane, a helicopter or a hot air balloon. Some organisation put their focus on spirituality and offer special healing tours for example. However, the most popular activity in the area is hiking, whether we are talking about easy hikes or long day trips. You can choose to walk on your own or with a guide.

This is also a fun sight to visit, in this museum everything revolves around the heritage of Sedona. You can see how inhabitants used to live. They take you back in time and show you what a cowboy life looked like. Luckily there are a lot of films saved from this time period.

It is also called Arts & Craft Village and is located along the shores of Oak Creek. The village is built in a magnificent Spanish Colonial style and has beautiful courtyards, fountains and vegetation. 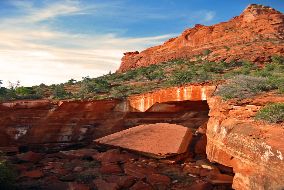