New York is the biggest city of The United States. It is about 7 hours flying from The United Kingdom. The city is also called New York City or NYC, to make a distinction between the city and the state with the same name; New York. New York is not the capital city of the state as many people think. The capital city is Albany. Albany is located about 240 kilometres north of New York. A part of the State University of New York is also located in Albany.

New York has five large boroughs. The most famous borough is located in the middle of New York City; Manhattan. The other states are: Brooklyn, Staten Island, Queens and The Bronx. If you go visit New York for the first time and you don’t have a lot of time, then a visit to just Manhattan is more than enough. Here the sights are all fairly close to each other. Have you been to New York before and do you have at least a week to spend here, please also visit the other boroughs. The five boroughs are subdivided in parts too. But the easiest way to find your way around New York is by getting familiar with the street system. That is really not as hard as it sounds.

Fifth Avenue (Broadway) is a very important street in New York. Since all streets start counting from Fifth Avenue. The numbers start rising the closer you get to the water. In addition to that, the streets west of Fifth Avenue are indicated with a W (from west) and the streets east of Fifth Avenue are indicated with an E (from east). This means that 167 E 45th street is very far away from 167 W 45th street, even though their addresses are so similar. Finding your way in New York City is very easy after a couple of hours, when you have gotten familiar with the system.

When you are in New York you will of course want to visit as many high lights the city has to offer as you can. We have listed a couple of the most popular sights for you:

Statue of Liberty and Ellis Island

You cannot visit New York without visiting The Statue of Liberty. A ferry will take you from Battery Park, located on the most southern point of Manhattan, to Ellis Island. When The United States became in depended in 1776, the foundation of how we know The United States today was laid with that. The Statue of Liberty is a symbol for freedom and was gifted by France to the freshly new country. They spend nine years to build the statue.

Times square is the soul of New York, as a bustling city. Times square is a square located on Broadway in the Theatre area. Here you can find many restaurants and night life options. You will mostly recognize it by the many advertising signs. It is also home to the sign on which the countdown is displayed on New Years Eve.

The Empire State Building is the highest skyscraper of the city. The building is 381 meters high and was built in 1931. Since the terrorist attack on the twin towers in 2001, it is the highest and probably most famous building in New York City. You can take the elevator to the 86th floor and enjoy the view from there. It is also possible to take the 1576 stairs to go up, the record time for this is nine minutes and 33 seconds. The building is featured in a lot of movies, has 35 elevators and gets about 25.000 people to visit every day. Something you can’t miss!

This is the memorial place of the Twin Towers. This place was once home to the highest skyscrapers of New York. The Twin Towers where 481 metres high and both collapsed after a terroristic attack on September 11th, 2001. A museum has opened in which you can get a tour by people who were personally connected to the towers.

John D. Rockefeller gifted this skyscraper with his own money to New York City during the economic crisis. The building is unique because of its panoramic views. You can take the super-fast elevator up to the 80th floor, to go up another 15 floors with another elevator afterwards. In the winter you should wear a nice winter coat, since there can be a bleak wind due to the height you will be at. In the winter it is also possible to go ice skating at the foot of the building during this time of the year.

This is the largest and most well-known park in New York, the park is bigger than Monaco. Space enough to go hiking, biking, skating, or like many New Yorkers do; working out. You can also visit the zoo, castle Belvedere or the Dairy (a library/community centre) In the summer you can go sailing on one of the many lakes, and with a bit of luck you can go ice skating in the winter.

Manhattan and Brooklyn are connected to each other by this two-kilometre-long bridge that hangs over the East river. You might recognise this beautiful bridge from movies and tv shows. You can cross the bridge by car, bike or on foot. On the bridge you will get a great skyline of New York. In the evening the bridge is beautifully lit up, definitely worth a visit.

Is a sight on its own. Here you can enjoy food and buy fun stuff in the home bases of the Chinese community of New York City. The Chinese immigrants keep their trade and culture alive.

Apart from these highlights New York City has much more to offer, this city never sleeps and there is always something to do.

A couple of facts about New York: 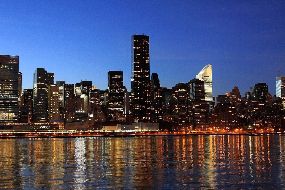